Our Valencia partner, Imed is proud to announce the success of the latest technology for Irish patients; Omnibotics. This robot-assisted system features next-generation technology designed to provide the surgeon with greater precision in implant placement. It is also famed for optimal control of ligament balance in total knee arthroplasty surgeries. As a result of this, Irish patients will achieve greater satisfaction and less pain after their surgery. The HSE refunds the cost of the procedure in FULL.

The OMNIBotics® System is the result of more than 10 years of experience in navigated surgery. This translates into simple and intuitive software. The tech incorporates unique robotic elements that allow each procedure to be adapted to the specific requirements of each patient.

Dr. Eduardo Sánchez Alepuz, one of the surgeons that our Irish clients are meeting, effectively free of charge courtesy of the HSE and Surgery now is exciting about the new development in surgery in Spain.

” We started robotization in prosthetic surgery, it in the knee. Now the goal is to introduce it in prosthetic surgery of the shoulder and hip. A significant learning curve for surgeons and nurses is required,  which is why during the last few months we have been trained by Dr. Carlos Martin Hernandez. This professional is the Head of the COT Service at the Miguel Servet Hospital in Zaragoza. He is one of the most experienced surgeons in the world”, concluded Dr. Alepuz.

Surgery Now is the exclusive Irish partner of IMed in Spain.

IMED private hospital in Valencia is the first private centre to offer this technique in the Valencian Community. Having access to this type of surgery is a major bonus for Irish patients stuck on medical waiting lists.

Dr. Sánchez Alepuz has successfully performed the first knee prosthesis implantation by means of robotic surgery performed privately in the Valencian Community. The Orthopedic and Traumatology Surgery Service of the IMED Valencia Hospital also has Ignacio Peregrín and Javier Zurriaga on the team. They have been in charge of performing the intervention, which has been supervised by Dr. Carlos Martin Hernandez. This first prosthesis operation was performed on a 70-year-old man who had gonarthrosis in his left knee. The condition as it so often does presents functional limitation and pain.

How does Robotic Surgery help?

There are two ways to use this robotic surgical intervention. First, the system is used for primary prostheses. This is where the prostheses are fitted for the first time. Also, for revision, when a prosthesis worn by the patient has to be replaced due to discomfort or a functional limitation. 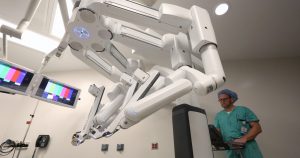 The main advantage of robotic surgery, according to the experts, for the implantation of the knee prosthesis is the precision in making the cuts at the bone level affecting both the femur and tibia. With their patented Omnibotics robotic system, the robot calculates with mathematical precision where these cuts should be made. As you expect, this is allowing for the exact mating of the prosthetic components and the exact assembly of the other factors described. These bone resections are essential to later attach the femoral and tibial components of any type of knee prosthesis. Moreover, this type of surgery involves a large number of factors; knee rotations, knee axes, the mechanics of the lower limb, and the alignment and tensioning of the soft tissues.

Surgery Now is thrilled to be the exclusive Irish broker of their services to people on waiting lists. Now, with the acquisition of the I block robot and its application in the Orthopedic Surgery and Traumatology Unit, IMED and Surgery Now continue with a clear commitment to state-of-the-art technology. This step forward in Surgery Abroad is only offered privately by IMED Hospitales in the entire Valencia region. In 2022 the doctors Sánchez Alepuz, Peregrín and Zurriaga, as well as a team of 4 nurses have received intense training to apply this technique.

IMED private hospital in Valencia applies robotic surgery in other fields too. Our patients can take full advantage of the process in fields like gynaecology, urology, digestive system and general surgery through the Da Vinci robot. This provides maximum surgical precision to these types of interventions. There is also a less invasive process for the patient, with the consequent reduction of hospitalization and recovery times.

What is covered by the HSE?

Our clients will get up to 100% refund for the cost of the procedure in Spain. The HSE and the Cross Border Scheme will cover the costs of the recovery too. If patients need ten sessions on Physio in Spain for example, that is fully refundable by the HSE. We take care of the paperwork so that our patients will have one less thing to worry about.

Basically Irish clients who are on a waiting list (or waiting to get onto a waiting list!) can skip the wait. We can do the Surgery here in Spain in as little as 10 days. Some patients back in Ireland are waiting two years and more for life-saving operations!

If you know anyone who can benefit from the EU funded scheme, please just get in touch with Surgery Now and we’ll do all we can to get you over to Spain for your procedure within a couple of weeks.

About the Author: Ian